When Deirdre Maguire was diagnosed with lymphoma, she began looking for complimentary treatments to help battle the disease. Now she’s spreading of the word of the new East-meets-West method.

For Deirdre Maguire, living with cancer has been a “blessing” rather than a curse. Since being diagnosed with lymphoma in October 2012, after discovering a lump in her neck, Deirdre has refused to bow to the disease, choosing instead to travel the world in a relentless bid to spread the word of a “self-empowerment methodology” that she says has changed her life – FasterEFT, (Emotional Freedom Technique). A stress relief system that involves tapping on energy 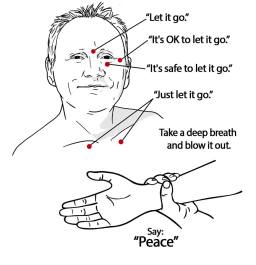 meridians located on the face and elsewhere around the body while voicing affirmative mantras, FasterEFT combines Eastern acupuncture techniques with Western notions of psychotherapy and is growing in popularity among those interested in complimentary therapies.

Co-author, Your Hands Can Heal You

“Deirdre Maguire is a world class Faster EFT expert. She understands the teachings at their deepest level. She has done her own work, and now works with clients from all around the world. I have spoken with a number of them who have raved about her skills, her compassion, her commitment, and her ability to get to the root of the issue quickly and efficiently. I highly recommend her as a teacher and coach.”

For more info go to; www.treasureu.co.uk/events

The post A Co Down woman is Faster EFT tapping into an alternative way of coping with cancer… and says it has changed her outlook on life forever appeared first on http://www.belfasttelegraph.co.uk

Sharing Is Caring: If You Find Anything On This Page That May Help Family and Friends. Please Share.